In 2015 the FCC opened the 3.5 GHz band (3550 MHz to 3700 MHz) for shared wireless access. In the last 3 years, interest in deploying LTE solutions in the band has snowballed. A quick look at the list of companies with full membership in the  CBRS Alliance 🡥 shows just how important this spectrum is for carriers, cable companies, and infrastructure providers.

For the WISP market, deploying in CBRS (Citizens Broadband Radio Service) is attractive as a way to efficiently increase customer bandwidth. While cost-effective, this still requires significant investment in both infrastructure and engineering. Being able to easily perform site surveys before deploying is critical to understanding where and what channels are currently in use. Armed with that information the operator can better understand whether or not they’ll need to obtain PALs (Priority Access License) or can get the bandwidth they desire under GAA (General Authorized Access) rules.

We were recently in rural Illinois working with a local WISP to do some investigation of local microwave sites. They know that another provider has already deployed LTE in CBRS and they’ve been searching for a cost-effective survey solution. The goal is to get a complete picture of what’s going on in the physical layer, helping them ensure they’re being good neighbors and minimizing the instances of being throttled by a SAS (Spectrum Allocation Server) for their customer’s data traffic.

Using panel antennas mounted on a lightweight tripod, along with SAF’s 2-8 GHz Spectrum Compact (p/n J0SSAP10), we were able to go to several sites and quickly gather data showing channels currently in use. It was cold and raining, so we were trying to spend as little time outside as possible. Spectrum Compact is an instant on a device with 9 touchscreen buttons for simple operation, and SAF’s low noise floor (-105 dB @ 1 MHz RBW) made it easy to see what was going on in the desired bandwidth – from the ground level. We also used the built-in recording feature to save every trace taken. In the end, we gathered all the data we needed and only spent about 5 minutes at each site, less time than it takes most spectrum analyzers to boot up! Because Spectrum Compact is a standalone tool we didn’t have to worry about long cable runs to a laptop in a truck or trying to keep an expensive PC dry in the rain.

Once we were back in the comfort of their operations center, we downloaded Spectrum Manager, SAF’s software for post-processing analysis and reporting. With the software installed and the recordings downloaded, we were able to use the overlay and marker features to quickly see what was going on in the physical layer at each site. You can see the results below:

In conclusion, SAF’s Spectrum Compact proved to be a simple and incredibly effective tool for evaluating potential coverage areas. Our client was able to quickly gain physical layer data without the need for heavy and expensive test equipment.

The learning curve for the field optimized Spectrum Compact was quick and intuitive, increasing productivity and cutting down on training expenses.

The software for post-measurement analysis allows you to fully investigate the measurements taken and generate reports when needed. With our coverage analysis, the client’s LTE deployment will expand their service area and help grow recurring revenue. 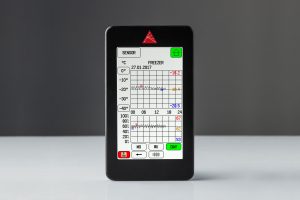 What are you looking for ?
Sign up for news

Sign up for Spectrum Compact news!
By submitting this registration form you agree to receive e-mail notifications from SAF Tehnika. You will be able to unsubscribe anytime.